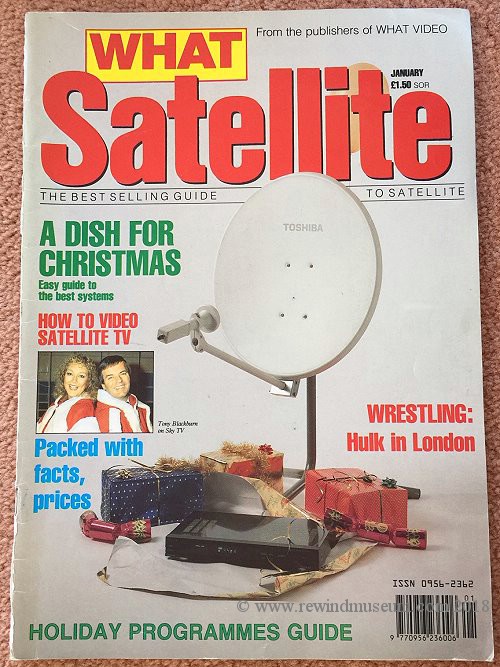 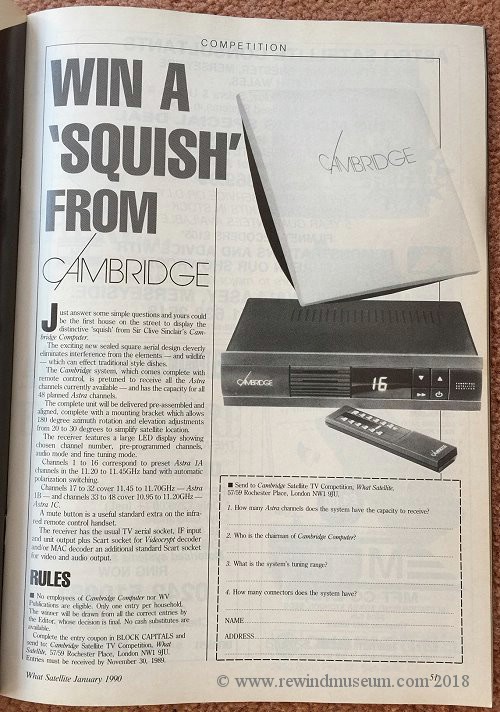 We have a large number of old "What Satellite" magazines in storage. Only a small selection are shown below.
This is an early copy. I purchased it in December 1989 and it is the January 1990 issue. (Magazines are released
1 month before their face date). This was the first What Satellite that I ever purchased (from new in Dec. 1989)
and was influential in me eventually (within a year) working full time in the satellite industry from 1991 onwards.
Also in this issue, you can see a satellite system from Clive Sinclair. The "Cambridge". You may remember "Sinclair
of Cambridge". The square dish was interesting as it was just a dish in a box and the box made it larger,
more noticeable and rather unsightly. The build quality of the "Squish" was not very good either.
There are more What Satellite magazines below.

What Satellite Magazine. May 1989 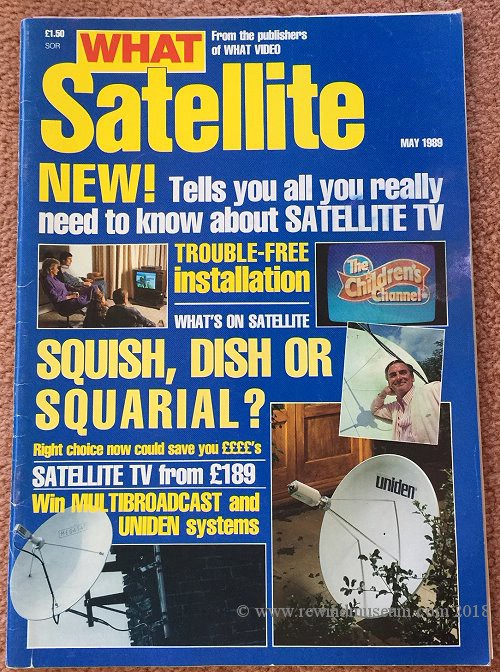 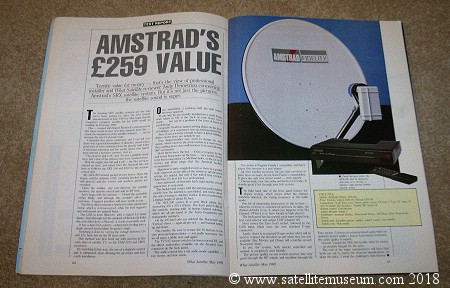 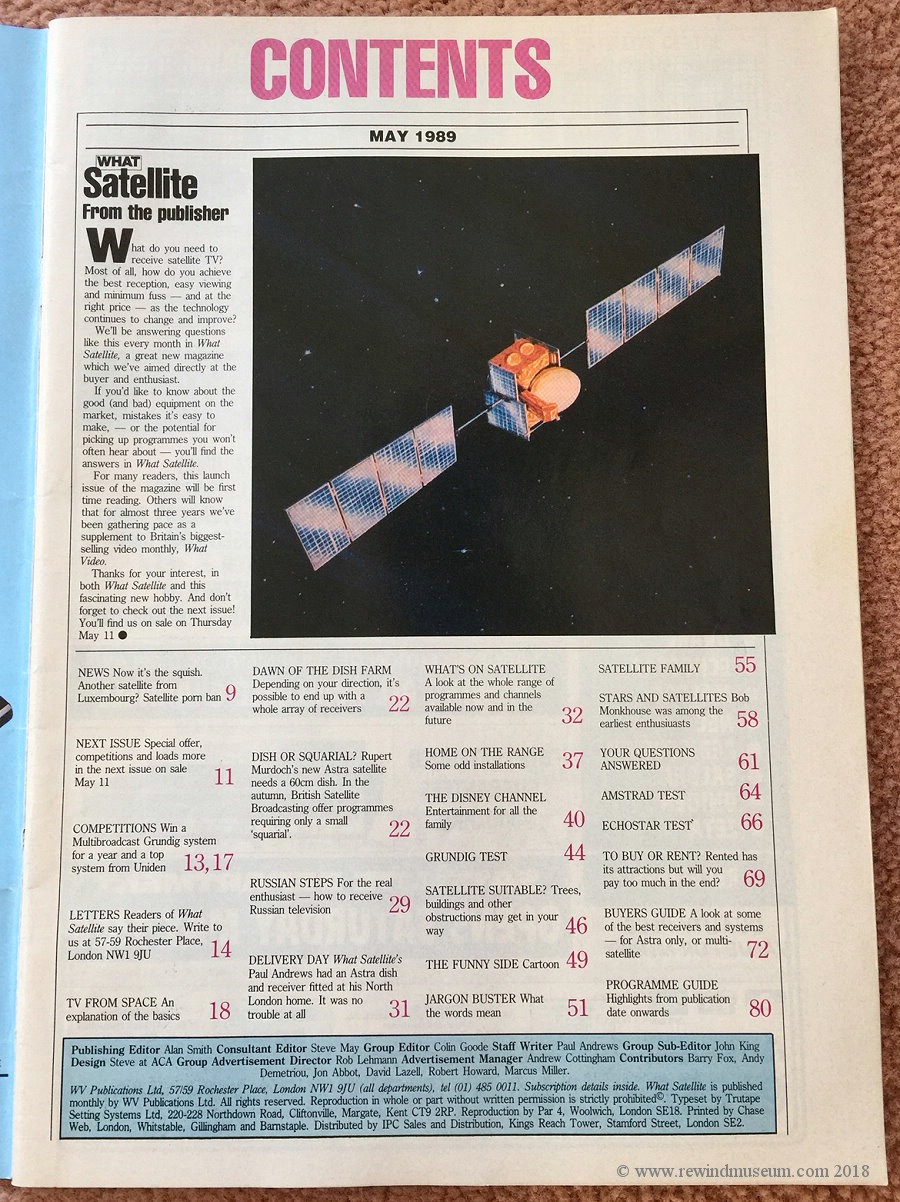 This is the 1st ever issue of "What Satellite" magazine. (donated)

"What Satellite" started as a supplement in "What Video" magazine for 3 years from 1986. In May 1989 this was the
launch issue of "What Satellite" magazine in it's own right and that is all detailed in the notes from the editor above.
In this issue you can see above the 1st ever dedicated Sky satellite system.
Sky Television had been available in the clear for some time using free to air receivers but
in 1989 the Amstrad SRX satellite system was introduced.
Several features made this an industry first.
It was supplied specifically for the analogue Sky channels that were, at that time, being transmitted
from Astra at 19E. It was a 16 channel receiver that had 16 preset channels tuned to the Sky frequencies
on 19E. This made it unsuitable for other satellites or packages as the tuner was not infinitely variable.
It could not be altered for other frequencies on different satellites.
The dish was designed for reception of Sky TV from the UK.
The price was low and affordable - for the first time most people would be able to afford satellite TV.
The blue cap voltage switching single band LNB is shown on our vintage satellite page. Since it used
13/18 volts to switch from vertical polarity to horizontal polarity (not using a polariser) only one
cable was needed between the LNB and receiver making it easier to install.
If anyone has a What Video magazine including a What Satellite
supplement (1986-89) we would be delighted for a donation.
There are more What Satellite magazines above and below. 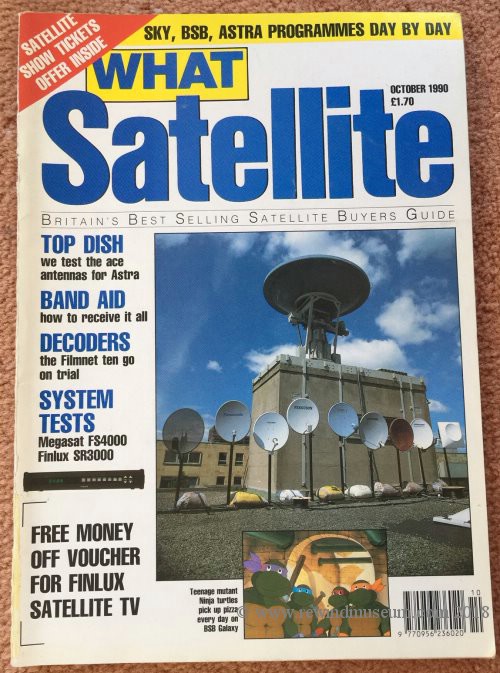 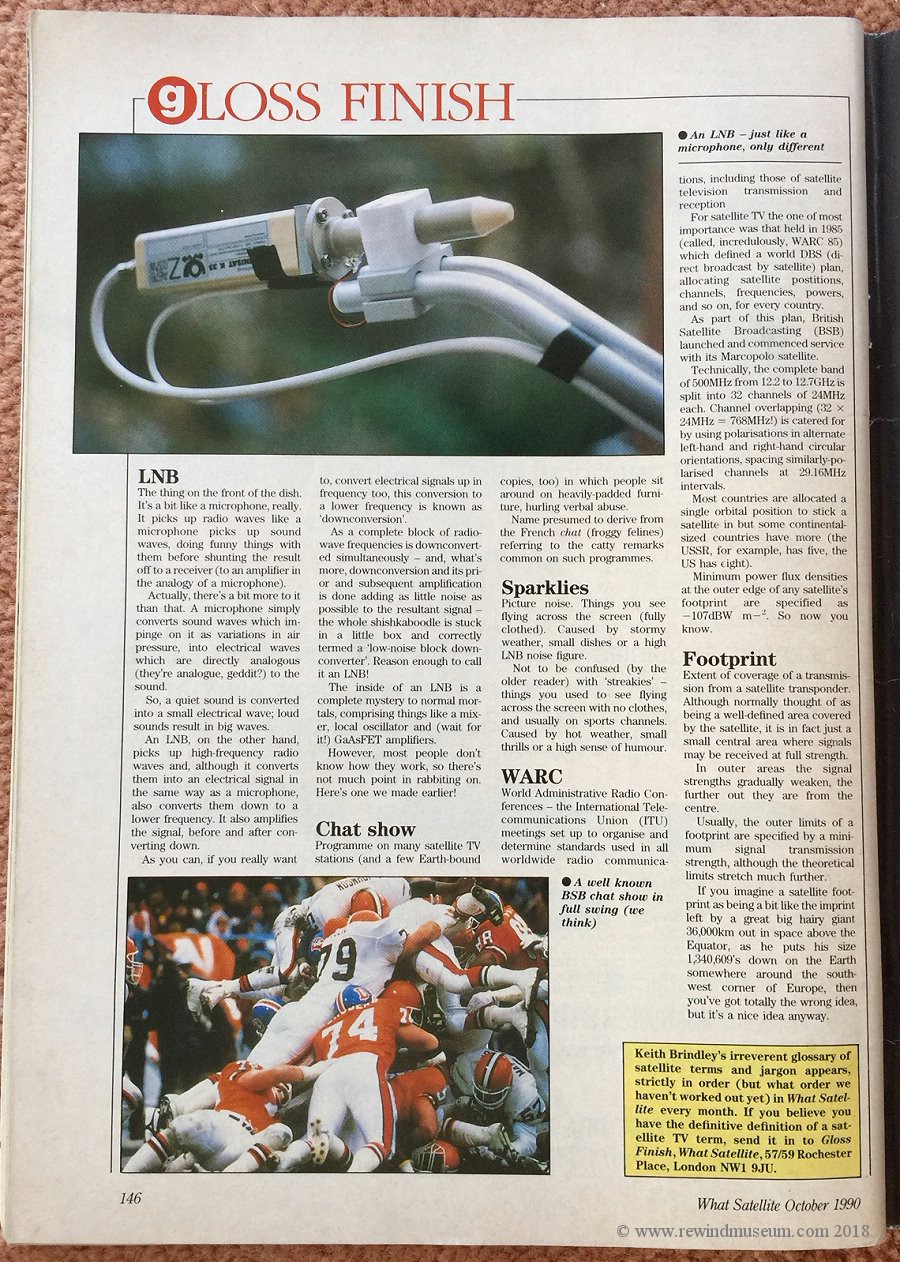 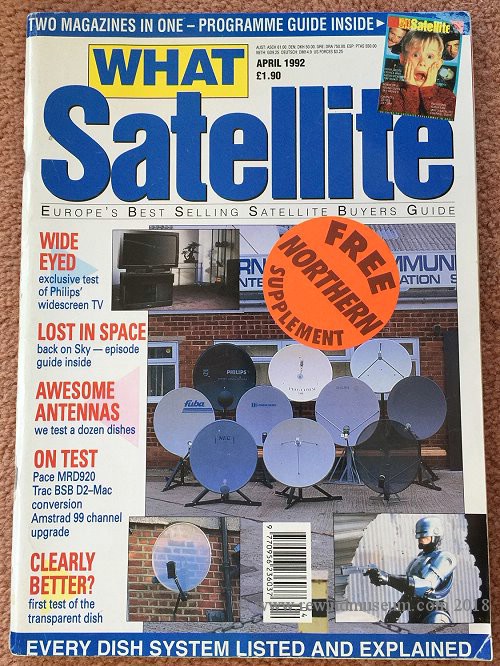 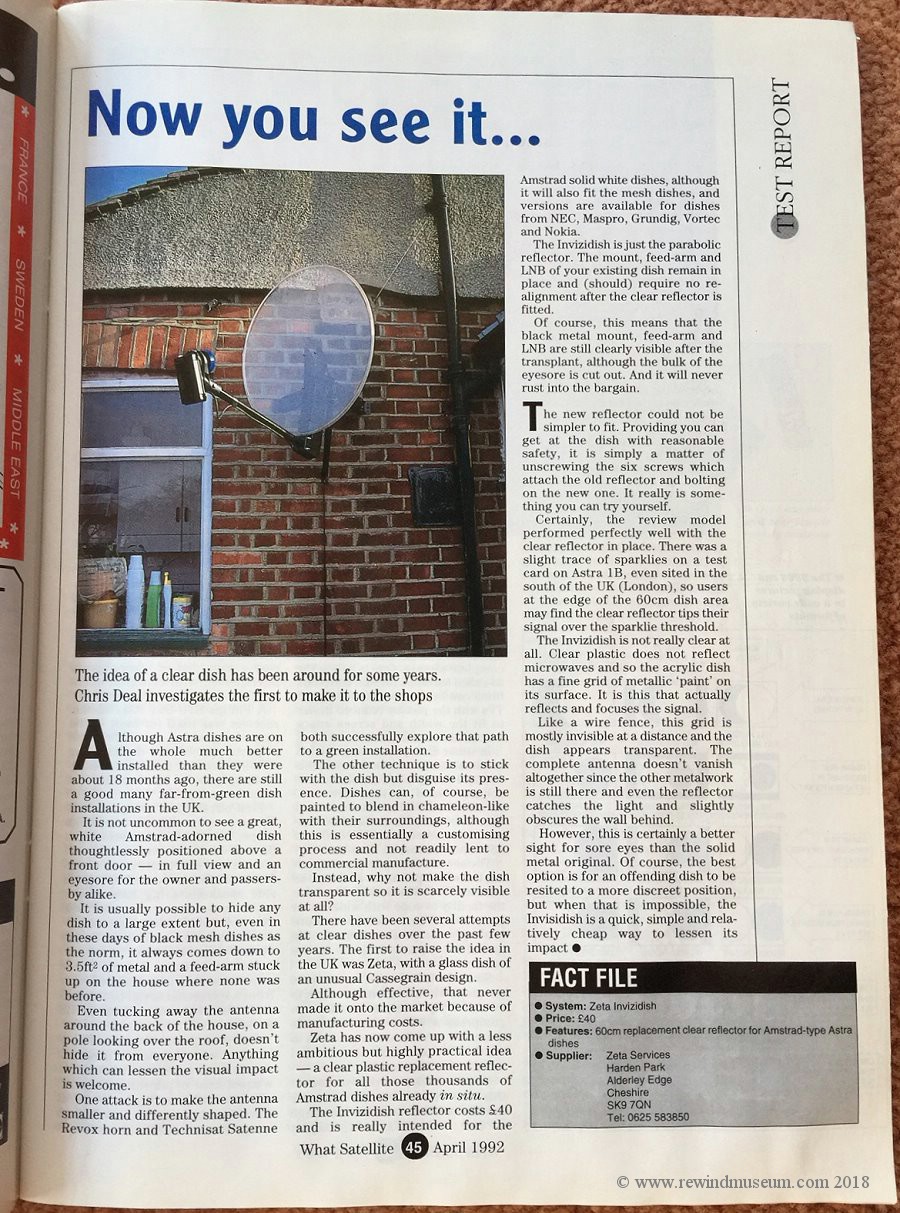 There are a number of Zeta products in the museum, including a Zeta receiver, the prototype antenna and the
motorised LNB bracket. Here we see a transparent satellite dish. Zeta liked to offer unusual products.
There are more What Satellite magazines above.

1986 was really in the very early days of satellite TV. The annual show in the UK was called The Cable and
Satellite show. Many exhibiters from that time have long since disappeared. 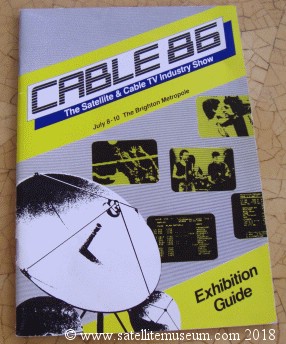 See below an extract from "Television" magazine September 1984 about the Cable 84 show.
A mere 2 dealers were offering 1.2m packages to receive "Music box" (and also the Sky Channel) for Ł1200.00
and this show "was much larger than Cable 83". Cable 83 was the 1st ever Cable and Satellite show. Cable 83
and 84 were at Wembley and Cable 85 and 86 were at Brighton Metropole UK. 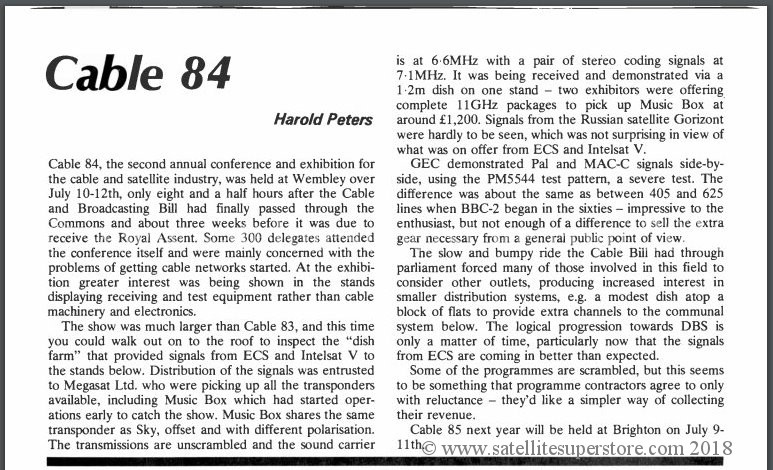 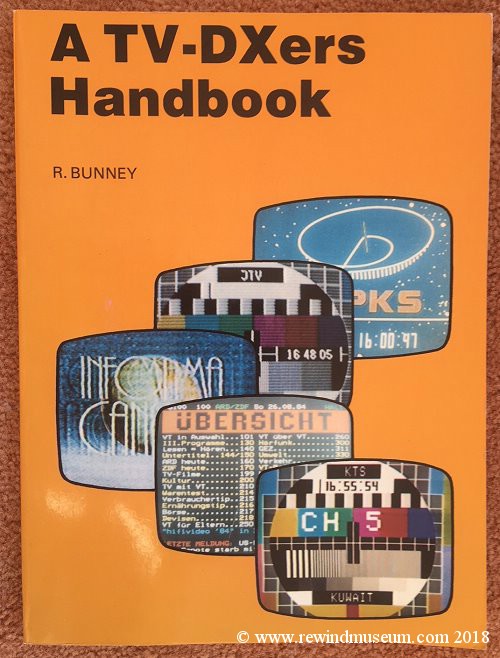 I have known Roger Bunney for many years. He is a satellite enthusiast and feed hunter. In 1976 he
wrote a book about "Long Distance Television. Before satellite TV, large high gain aerials were used
to try and receive a different terrestrial transmitter. The BBC and ITV would have local programs
and those programs would be different from one region to another. Being able to receive more than
one transmitter provided a wider range of programs. This was still a very small, even minute
selection compared to the 1000s of channels available these days from satellite or internet
sources. Sometimes rotating motors were used to turn the aerial from one transmitter to another.
Indeed I still have an Antiference aerial rotator which I used in the 1970s. It was not used
for TV reception, it was used to rotate a large FM aerial. In 1986 he wrote another book
called "A TV-DXers Handbook" (shown above) about terrestrial and satellite TV
and including satellite feed hunting using a satellite system. 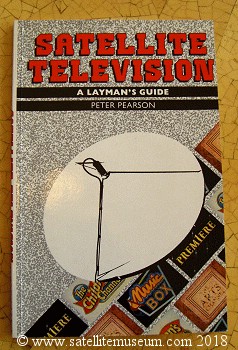 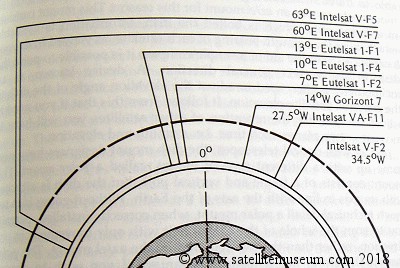 We are very grateful to Peter for providing a signed copy of this historic publication.
First published in 1987 it explains the basics of satellite TV to a public who, at the time
only knew about the 4 channels available from an aerial. Very few people in the UK in 1987 had
either satellite TV or cable. Indeed the satellites were low power requiring a fairly large dish
and whilst the channel choice was wide compared to terrestrial TV, it was very limited
compared to the digital choice today. A small extract from the book is shown on the right
and the main satellites available at the time are detailed. Clearly 13E was just as
important in 1987 just as it is today. Peter also contributed some old satellite receivers
to the museum including the Triax 2000S shown on the Satellite Page 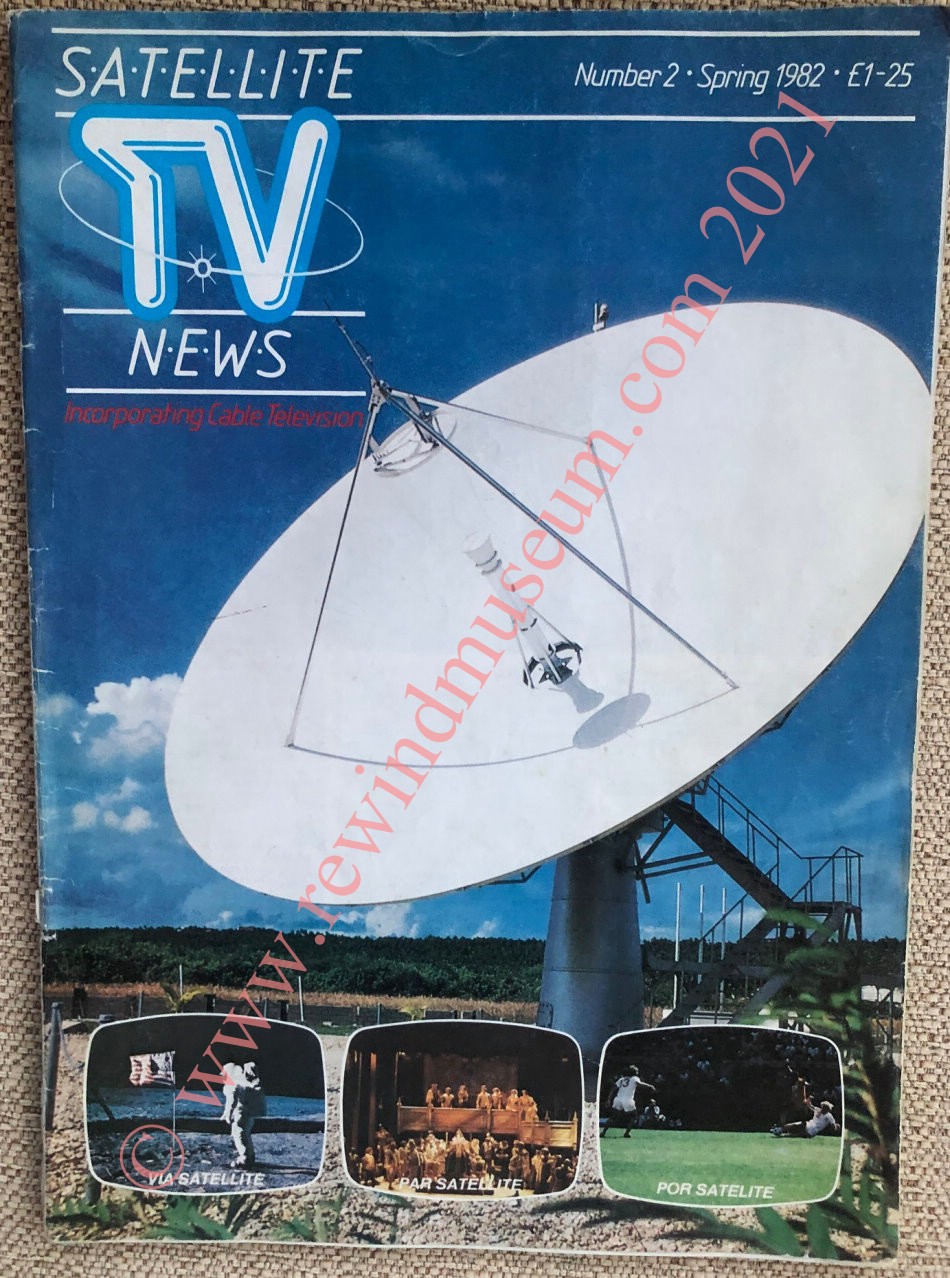 This is our earliest dedicated satellite publication (although there are also some articles in "Practical Television" magazine.
3m+ dishes were needed to receive TV broadcasts in 1982 and they were mostly from Russia but the OTS (orbital test satellite)
aimed at Europe became active in 1982. Still needing a 3m dish, it offered 2 hours a day of the "Satellite Channel". By 1984
The Satellite Channel became "The Sky Channel". This magazine includes a 2 page review of Roger Bunney's book
"Long Distance Television". It also details a professional profile of "Taylor Howard". The introduction in the
magazine looks forward to regular satellite TV transmissions receivable on a 2 and 1/2 foot (76cm) dish by the mid 1980s.

The editor of Satellite TV News (which was the first ever dedicated satellite magazine) was Todd Slaughter.
I spoke to Todd via "Messenger" in May 2018 and he gave me the following information -

"I went to Atlanta to see a former Radio Luxembourg colleague DJ Kid Jensen who had recently become an anchor
on WTBS The Superstation, and we all went to a reception at the dish farm, The reason for the party - that
evening he was launching CNN. I was inspired having followed the development of satellite broadcasting since
the launch of Telstar in 1962. I contacted Colonel Parker in Las Vegas and he told me of a Satellite TV
exhibition at the Convention Centre, and he got me VIP tickets and Press Pass. Upon my return I had
meetings with both the BBC and ITV R&D management, and Satellite TV News was published.
Satellite TV news was published and edited by me for three years then it was bought by the Daily Express
group and re branded as Satellite & Cable TV news and ceased publication a year later just three months
prior to Rupert Murdock announcing the launch of Sky TV - it was always a quarterly. During the years that
I produced it there was only one direct broadcast test satellite OTS transmitting only 4 hours a day to no
more than 1000 receivers - this project was funded by Thames Television UK.
There were a few enthusiasts who had industrial parabolic receivers notably Steve Birkill who mounted a 12
foot Marconi dish onto a fire engine turntable controlled by hand by a series of pulleys - an amazing
character who showed me the delights of capturing international news and programme feeds from Arabsat,
Gorizont and the American networks."

Here is an article below from this Spring 1982 edition of "Satellite TV News" written by Todd Slaughter. 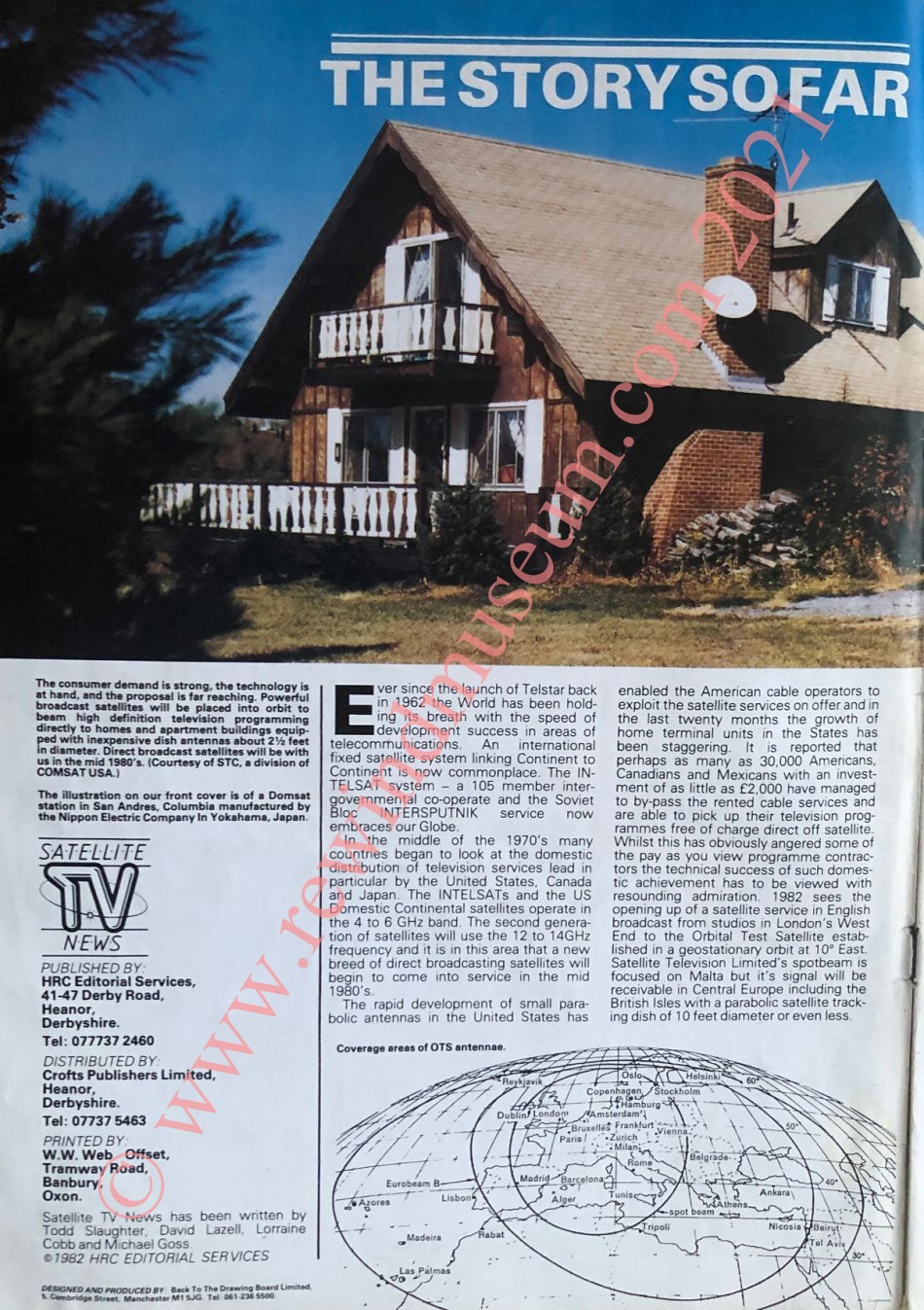 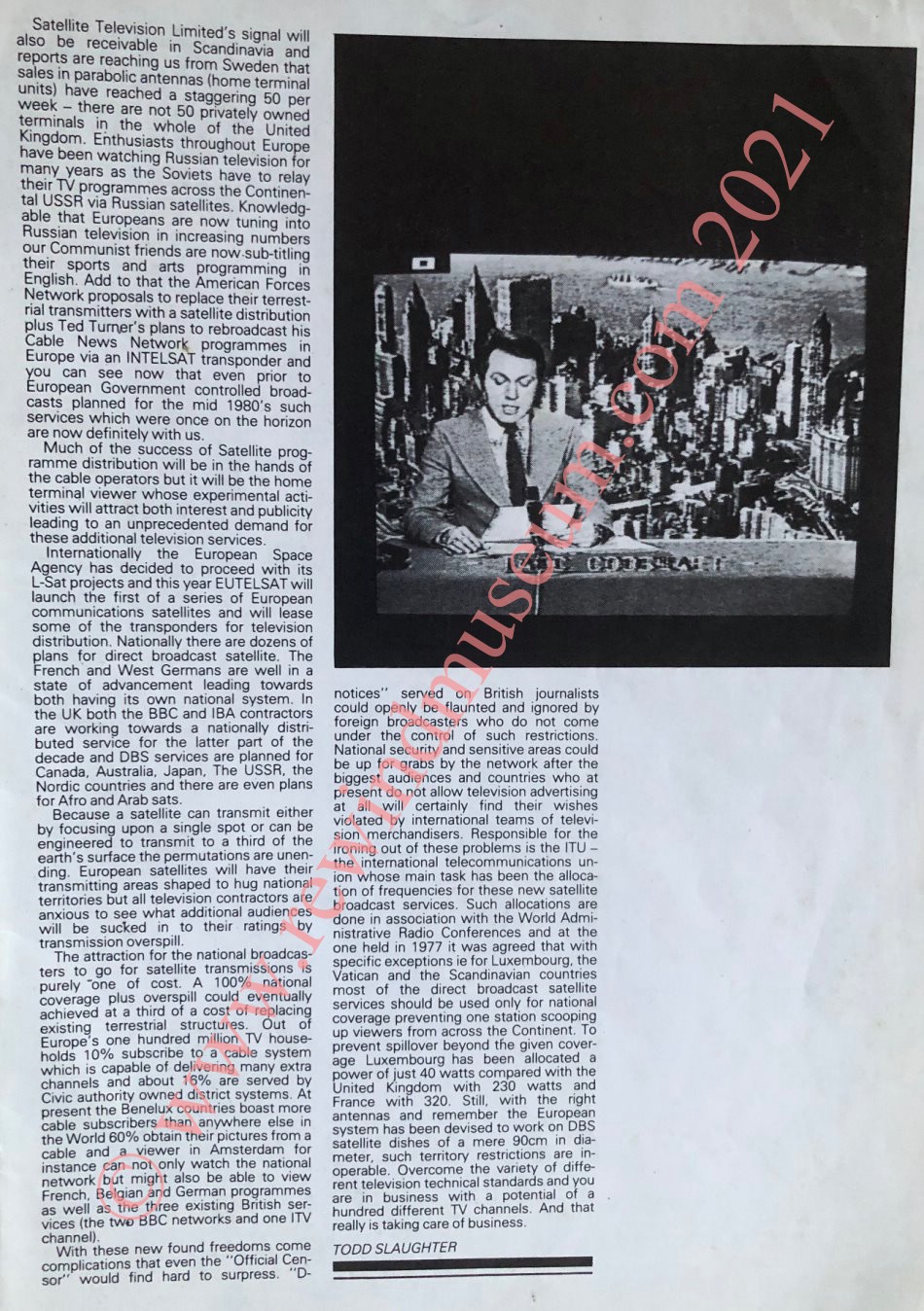