Sony claim the 1st ever video cassette recorder, was the VP 1100, (invented by Sony in 1971)
however, this was a playback machine (as was the VR-1000) and actually the first record / playback
machine was the Sony VO 1600. The Umatic system used the 3/4 inch tape UMATIC video system.
UMATIC was the very first video cassette system.
This site is mainly about milestone "firsts".

There were three Umatic units released, we believe, by Sony in 1971. They were the
VP-1100, the VP-1000 and the VO-1600. The VO-1600 having more features including record.
It was Sony's intentions that this would be the worlds first domestic video cassette recorder.
It was a "VCR" that is to say record and playback, not just playback. It was a full VCR.
Before 1771 all video recorders were reel to reel machines.
Let us consider the criteria for a consumer domestic VCR.
The VO-1600 was in a wood "domestic" cabinet.
It had UHF and VHF TV tuners. TV tuners would generally only go into domestic equipment as recording
studios would normally only require AV in and out for cameras, or copying, not recording from TV.
It had a crude counter but crucially it did not have a timer and it was very expensive.
It was therefore left to Philips with the n1500
in 1972 to claim the title "first ever domestic VCR"
for four main reasons,
1. The N1500 included an analogue timer,
2. At about Ł650 it was affordable.
3. The N1500 used smaller cassettes with 1/2 inch tape. The VO 1600 used large cassettes with 3/4 inch tape.
This meant that the Sony was capable of higher quality but even in the earlier days of reel to reel video,
3/4 inch tape was associated with professional formats and not domestic formats.
4. Most importantly the VO-1600 was bought by professionals and not by consumers,
the Philips was bought by consumers and used in the home.
It therefore follows that no matter what a manufacturers intentions might be, the consumer decides for
themselves. There are therefore strong arguments for agreeing that the Philips N1500 was the first domestic
VCR in 1972, but the Sony VO-1600 takes the accolade as the worlds first video cassette recorder in 1971.

This museum is primarily about first achievements and so this are all very interesting.

This is a very exciting addition to the museum. It is a mechanical flip counter and tuner.
Designed to be added to the early UMatic VCRs like the VO 1600 above.
If it was added to the VO 1600 it would offer a timer a tuner that would
mean channels could be recorded at a later time, unattended, in the usual way.
Not a big deal these days but in 1971 it was an innovation.
(In 1972 the Philips 1500 used an analogue clock.)
It is in mint condition.
Question - it the largest VCR tuner timer ever made?

The Sony web site (history section) claims the VP-1100 was the first ever VCR!!
How can a video player (only) be the fist ever video cassette RECORDER ? !!
Looking at the library picture above and comparing the VO-1100 with the VO-1600, the
differences and similarities are clear. The VP-1100 has many identical features to the VO-1600
but is missing the record feature and the VHF and UHF tuner section. Clearly a TV tuner is
not relevant unless a machine can record. "VP" stands for video player. It would follow
that Sony introduced the VP-1100 player and VO-1600 VCR at about the same time.
Introducing a new colour cassette video recoding system (as opposed to reel to reel) does
not make any sense without a recorder. Why then does Sony make a big deal about the
VP-1100 player on their web site claiming it is the first ever VCR? You would think
that a manufacturer with such a fantastic record of achievements would try to get their
facts right. On the same site Sony also claim the CV-2000D (a reel to reel video recorder)
was the first domestic VCR! The Sony CV-2000D was arguably the first domestic VTR
(video tape recorder) but it was years before the Sony VO-1600 which WAS the first VCR.
Here are the pictures of our own VP-1000. Here there is a white cassette in the machine. 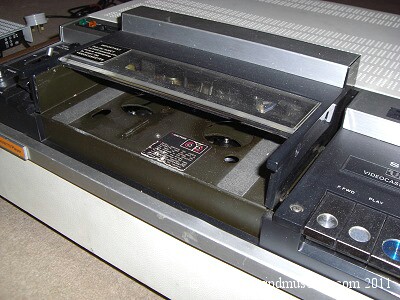 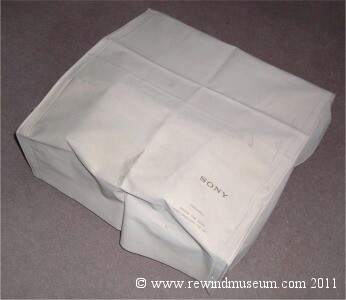 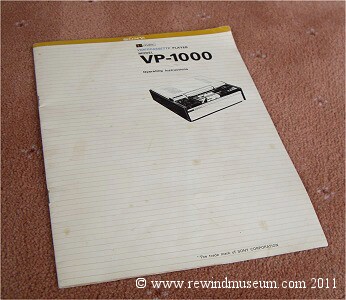 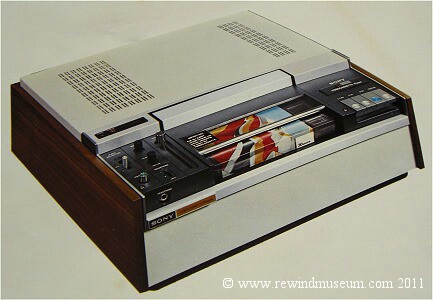 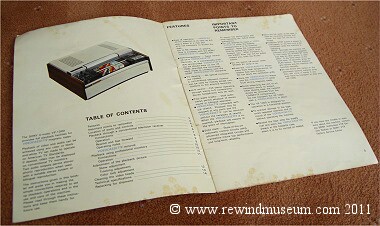 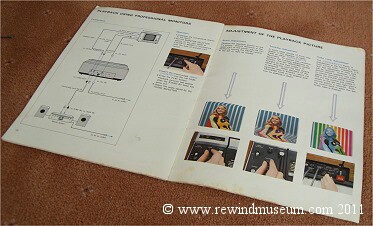 This is the worlds first portable video cassette recorder.

This is the first portable Umatic VCR. The VO-3800 records in color, but can only
playback in black and white. This was typical of many potable units at the time.
For colour playback, a VCR must be connected to the AC-3000 12V power unit and
color playback adapter. The AC-3000 is also used to recharge the battery.
Having some of the colour circuits in external equipment helps save weight.
The VO-3800 only weighs 13.6 Kg which is quite light compared to other VTRs at
the time. (In 1974). We also have the camera intended to be used with the VO-3800. This
was the DXC-1600 hand held colour camera. The VO-3600 is very bulky and bigger than portable
colour reel to reel VTRs in 1974 and yet it was not that heavy. The fact it used 3/4 inch
tape resulting in large cassettes and an early cassette loading and eject system would
have been a major factor in not being able to keep the size as small as other VTRs.
The first Betamax portable, the SLO-340 followed in 1977 and the
first VHS portable, the HR-3300 followed in 1978

This Umatic recorder was donated to the museum in 1999 and although it is not a first
achievement it has been with us for some time and so has been included. It is an early model.
3/4" U-matic standard, two VU meters, RF modulator, 130 W power consumption. 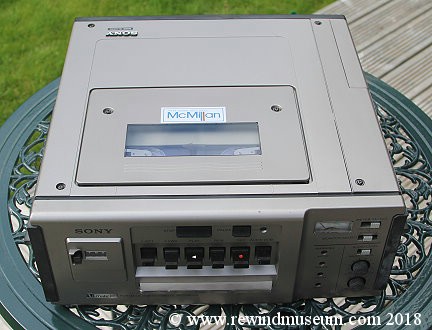 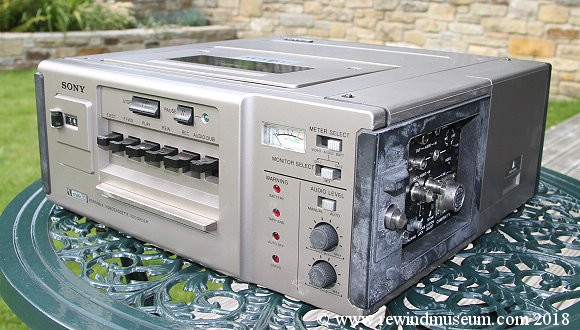 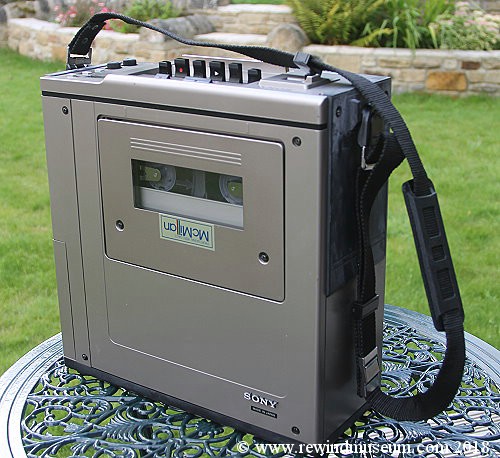 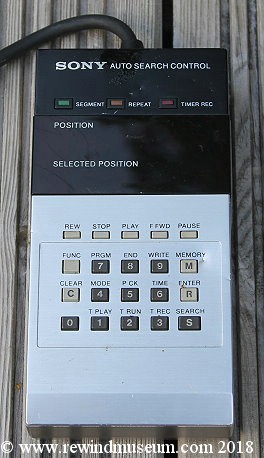 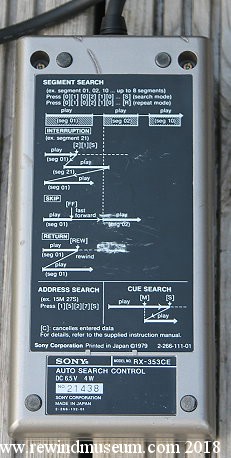 This Umatic portable followed the VO-3800 above and is a really well built machine. Umatic was capable of very high
quality colour recordings. It was a professional system, much better than VHS and Betamax at the time and
yet this much improved unit came out about the same time as the first VHS portable. The VO-4700 at 8Kg
was quite a bit lighter than the Vo-3800 as Sony replaced metal parts with plastic wherever possible.
It had similar functions to the VO-3800 with some new extra functions added. This kit came with the
rx353ce wired remote control which included an auto search function. Following the VO-4800 was the
VO-6800 and again Sony reduced the weight. This time to 5.5Kg.