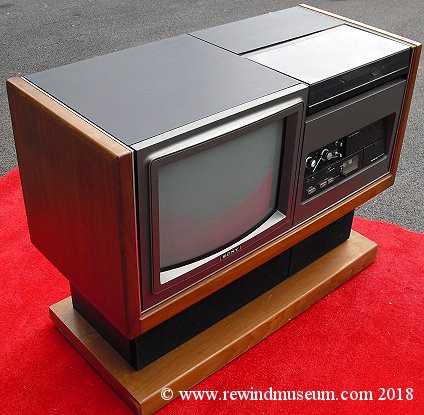 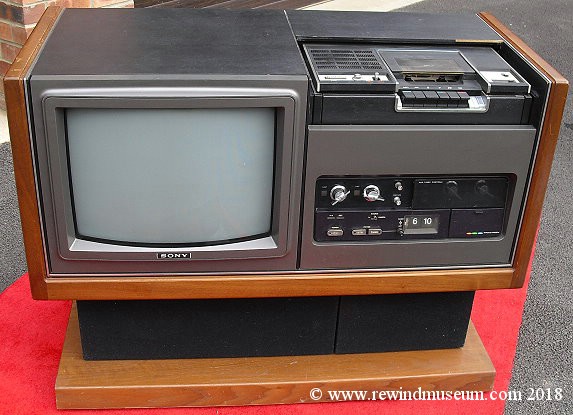 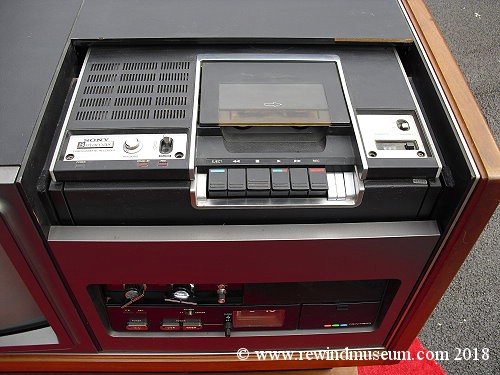 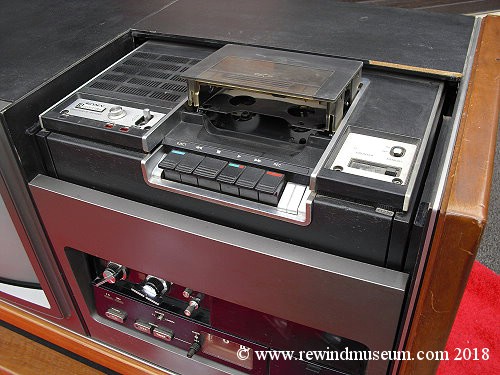 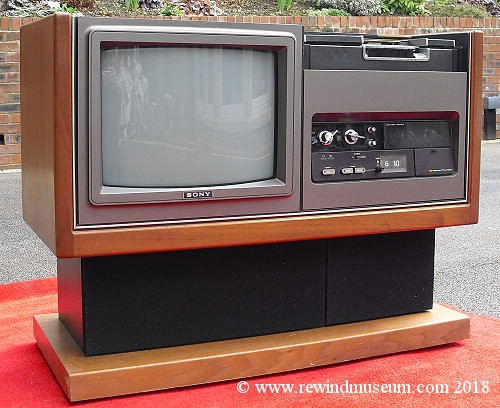 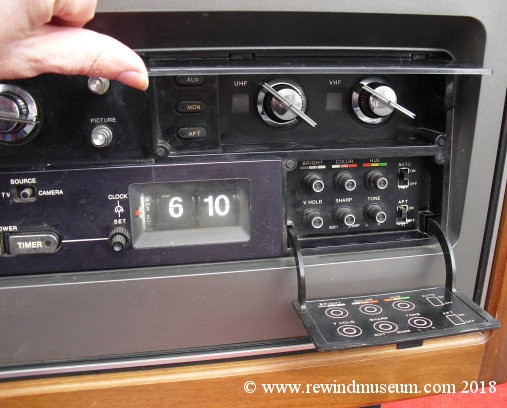 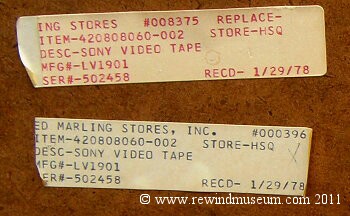 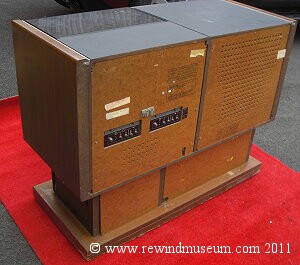 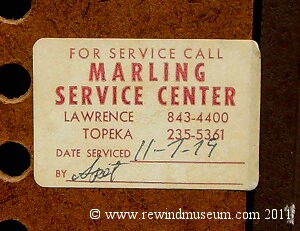 We are very pleased to have a LV-1901 in the museum. We are delighted to have this 1st ever Betamax unit in the
collection. The Sony SL-6200 was packaged with a 19" colour "Trinitron" TV in a wooden cabinet. The original
price was $2295. It was all in a teakwood cabinet. Included was a 24-hour timer and a camera input. The TV was
not just a monitor but had a built in tuner and there was a second TV tuner for the VCR. This meant that you
could record one channel and watch another. The first Betamax VCR was part of this Sony combined video and 19"
TV console. In Japan it was called a Sony LV-1801 and the VCR inside was called an SL-6300. In America this console
was called an LV-1901 and the VCR inside an SL-6200. This unit was introduced in the November of 1975. This unit
has some stickers on showing it was sold in January 1978 and serviced in 1979. It would have been on sale in the
USA for a few years. It is a heavy unit and runs on castors. Notice the tuner and timer units at the front in a
separate panel. Also notice the mechanical timer that looks very similar to the
stand-alone Sony TT-100 Umatic timer from 1972.

Another SL-6200 is below. Finally notice the similarity in the knobs with the later SL-7200
which is below the SL-6200. Scroll down to see them.

The Sony SL-6200. No tuner but AV inputs and outputs. Mechanical counter. The plain black
sides would suggest that it was originally inside another LV-1901 console. The sides would
be hidden in an LV-1901 and so did not need to be a decorative wood finish..
We are delighted to have an SL-6200 in mint condition in the museum.

In the spring of 1976 Sony released the first stand-alone Betamax VCR, the SL-7200. This was an updated SL-6200
(without the console) but with a tuner. The 7200A pictured here, also from 1976 is simply an SL-7200 but with
added audio video and microphone inputs. (The standard SL-7200 only had audio and video outputs.) Notice that
the SL- 7200 has a stylish front and wood sides which sharply contrasts with the SL- 6200 where the sides were
hidden. This SL-7200 is also in mint condition. Dates and details from www.sony.net This museum is primarily
about milestone first achievements in consumer technology. We are delighted to have a sample of the first ever
stand alone Sony Betamax VCR (with embedded tuner) in the museum. This unit is in mint condition.

We even have the original manufacturers carton. The unit is an NTSC version.

All of the packaging and accessories is complete. Warrantee forms are in the packet on the side of the box.
When you look in the bottom of the box you can see the dust cover in a sealed bag

All of the paper work is complete.

The Sony SL-8200 Betamax VCR. This unit was donated in 1996 by a local specialist video store that dealt with
pro-industrial equipment. They were throwing them out when we were visiting them. It is in it's original box
with all of the packaging and manuals. Looks like it was never sold although could have been a demo model. They
actually gave us two (fully boxed and new) and I sold one a few months later. I Don't usually sell anything but
at the time I was short of space and I had not really thought out everything the museum was going to keep. Even
so it did not stop me keeping one! This was stored in a different place and I was able to get hold of it today
(14th March 06). There place where there would be two tuner knobs is blanked off. This unit did not have an
internal tuner to record TV programs. It came from a pro dealer where most VCRs were sold without domestic tuners
and so this is not surprising. It is a 110V unit and NTSC and yet it came from a UK dealer which is strange.
It may have been stock for supply in video standards conversion applications. The dealer that gave it to us was
in Newcastle not London (as per paper work above) and so the unit must have been imported by the London dealer
and supplied to the Newcastle dealer. The original US dealer is also on the paper work. The fact that it is
absolutely new and complete makes it very interesting. The unopened pack seems to contain photos but we have
decided not to cut open the sealed polybag envelope. It says "Betamax programs collection for Betamax owners."
If anyone has details of the contents of this pack, please let us know.

The Sony SL-8200 (1977). This is a second generation Betamax VCR, It was the first Betamax to have two recording
speeds The new 1/2 speed capability provided 2 hours recording time on the new L-500 Beta videocassette. This
was to try and compete with the new VHS VCRs which offered 2 or 4 hour of recording time.

Due to the use of plastics in the case, this unit is lighter than the first (JVC) VHS portable video recorder. It is
a valued addition to the museum. This was classed as the professional version with a 10-pin J-type screw-on barrel
camera connector and other pro features. The domestic version was the SL-3000 (see below) and the SL-3000
was introduced in 1980. Some web sites claim the SL-3000 was the first portable Betamax unit but the SL0-340
was earlier. They are, however, very similar to look at - see the SL-3000 below.

It is often the case with consumer electronics and cameras that the domestic version is black (like the SL-3000) and
the "pro" version (like the SL0-340) is cream or light grey.

The 9300 was the 2nd Betamax VCR from Sanyo to be introduced into the UK. (The 9100 was the 1st in 1977).
This unit is in mint condition. It is large and heavy with mechanical keys. Interesting features, The
digital display could be switched between clock and counter. A wired remote was included.

Toshiba v5470 VCR (Betaformat V-5470B Colour Video Recorder). Acquired by the museum in 2003. Features - Picture
search, variable speed play, still frame, slow motion and up to 2 times normal speed adjustable by a wheel under
the front of the machine, index search (Toshiba called this Quick Select) that works. An Advanced timer. The three
event timer could be programmed either as one-off events or on at the same time each day. Liquid crystal timer
display in 1977! This consisted of black digits on a yellow background. Quite a rare VCR.

The camera kit above is the Toshiba TA-11 video camera and is in the V-5400B brochure as the matching camera for
the V-5470 VCR. There is very little information on the Internet about this Betamax VCR. Indeed the only library
picture I could find was the rather poor one below. This unit is quite large and heavy but due to the pleasant
wood surround, it is an attractive unit. It is also quite a well specified unit for 1979. This museum example is
very good condition and comes with a manual and manufacturers brochure.

The British company "Bush" cloned the V-5470B under their own name, The Bush model was the BV6900A which had a
silver case compared to the Toshiba's woodgrain case.

Many web sites suggest this was the case and clearly the SL-6200 above with it's black sides can be identified as
having been inside an LV-1901. However, one of Sony's web sites shows a 6300 with attractive wooden sides. Clearly
this was a stand alone unit as these sides would have been lost in an LV-1901. You can see below the picture of this
unit. It is also clear that apart from the sides, it is identical and does not have a built in tuner unit even
though it is a stand alone unit. The Tuner unit in the LV-1901 being a separate panel.

It therefore follows that only the SL-7200 (or SL7300) can be considered as the first Betamax fully "domestic"
"stand-alone" VCR as it was the first with a built in tuner unit. The SL-6200 was ONLY a video tape recorder and
by itself could not record TV programs. That is to say the inclusion of a tuner is a pre-requisite to the "domestic"
description along the same lines as the Philips N1500. It can also be argued that a domestic VCR should include
a TV tuner AND a timer. The Sony LV-1901 clearly was the first ever Betamax unit in 1975 and contains both
a tuner and a timer (and TV).