Why is this museum different? 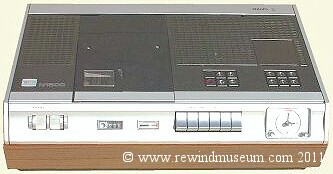 This museum evolved from 30 + years of collecting. We now have a good collection of old technology.
Most importantly, next to each item, a thorough history with dates is included. In particular we try
to include important "firsts" from a number of manufacturers. There are not many consumer electronics
museums on the internet. Those that are there are largely specialist in one particular area (e.g. video
or computing). This museum, we think, is unique in that it covers a wide range of vintage consumer
electronics and concentrates on manufacturers first achievements. e.g. first VCR, first laser
player etc. In addition, it is not just a collection of photographs and information. The exhibits
actually exist and once a year a selection are taken to a large exhibition for public display.
If items in the museum are part of our physical collection, we say so (most are). Sometimes photos
of items that are not in our collection are detailed to correctly list important dates and innovations.
These are likely to be items we are actively seeking. We hope this museum contributes to the
historic data resources on the world wide web. The museum continues to grow.
We hope you enjoy browsing the site.

The Ampex Signature V 1963 The first domestic video recorder.
In 1963 this unit was offered in the Neiman-Marcus catalog for $30,000 It was nine feet long
and weighed 900 pounds. The video portion of the system included the Black & White
reel-to-reel video recorder with TV tuner and automatic timer as well as a home television camera.
The cabinet also housed a complete audio system including an AM/FM tuner, stereo amplifier, record
player, reel-to-reel audio recorder, and stereo loudspeakers. A colour TV was viewable from the
front of the console, while all other components were accessed from the top. The $30,000 price
tag included a personalized plaque and installation by an Ampex service engineer.
If you look at our Ampex CC-452 studio camera from 1965 you will see how closely it resembles
the camera packaged with the Signature V

We believe this to be the first Ampex 1-inch tape video recorder. 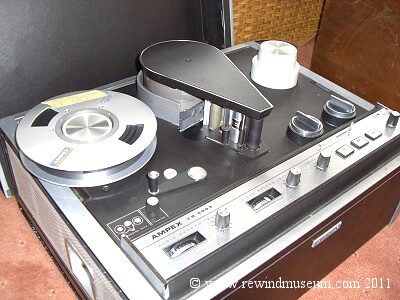 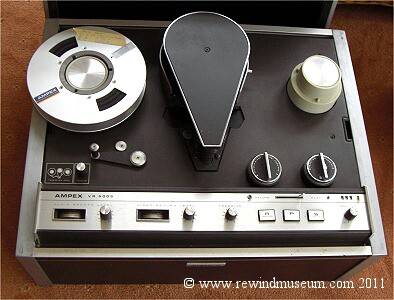 Domestic or profession 1-inch reel to reel video tape recorder (VTR).
The VR 5003 was the international version of the Ampex 5000 (US version).
Ampex was founded in 1944 and incorporated in Califirnia in 1946. In 1947 they introduced their
first audio tape recorder - the model 200A. In 1956 they introduce their first (reel to reel) video
tape recorder - the VR 1000. This was a quadruplex VTR. It was the first production VTR ever sold
(as opposed to earlier prototypes). It was a large floor standing unit on wheels and cost $50,000
The VR 5003 (& 5000) here from 1965 was called a "portable VTR!"
One person could carry it with a little effort. Build quality was very high.
Ampex are still in business today. 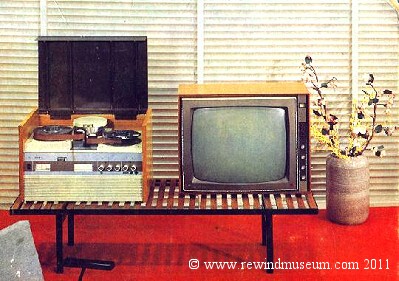 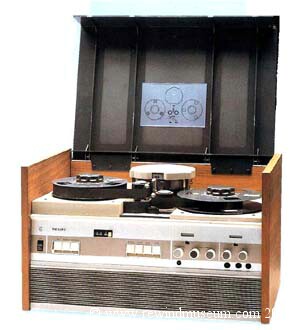 This is a good contender for the first domestic video recorders as it is a relatively compact
stand alone unit. It still weighed 45 Kg and did not contain a TV tuner or timer which might be
considered essential for the domestic "1st" title. It used 1 inch tape.
We now have a Philips EL3400 We also have a second Philips
reel to reel recorder, the EL- 3402 (using 1/2-inch tape) from 1968 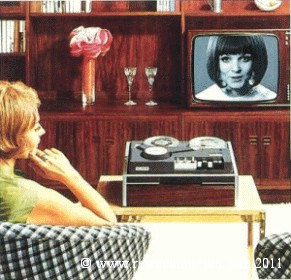 It used 1/2 inch reels and the unit was no larger than audio tape recorders from that time.
(It is compact at 43.5cm wide by 36cm deep by 19cm high)
Philips marketing brochures were very definitely aimed at the domestic consumer.
The unit is remarkably light. Indeed it is even lighter than many audio reel to reel
recorders of that time at only 13.55Kg.
It was housed in an attractive wood appearance case to match a domestic setting.
We have a Philips LDL1002 in our museum

Many web sites and Sony themselves (but you would expect that) claim this to be the
first domestic video recorder. It is a stand alone VTR and used 1/2 inch tape. It is certainly
the first ever 1/2 inch tape domestic video recorder but is it really the first stand alone VTR?
The claim must be considered and compared with the Philips EL3400 in 1964. The CV-2000 was
3 years after the EL3400. The EL3400 used 1-inch tape but was most definitely aimed at the home.
It is interesting to note that Philips do not make a 1st achievement claim but there are strong
arguments that the EL3400 should be considered as the first ever domestic stand alone recorder.
Either way we are delighted to have two Sony CV-2000 in the museum
and what is certain is that it was the first domestic VTR that used the narrower 1/2-inch tape.

Everyone agrees that this was the fist domestic cassette recorder. Since it also
had a built in TV tuner and a timer perhaps we should also consider it for the overall
title of first domestic, consumer video recorder? The Sony Umatic video cassette system
came out a year earlier in 1970 but was aimed at the professional broadcast market. The
cassettes were large as they used 3/4 inch tape, recorders were large, heavy and very
expensive. There was no domestic marketing. Although the Philips n1500 came out a year
after Umatic and was not the first video cassette recorder, it was the fist domestic
video cassette recorder. We now have two Philips n1500 recorders in our museum