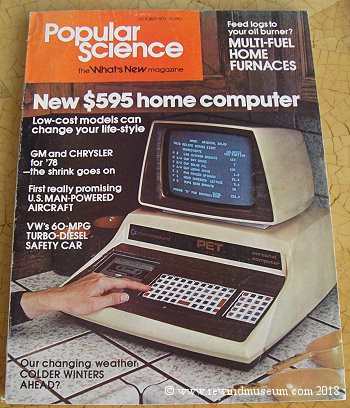 The first computers mostly went into schools and colleges but they soon arrived in the home.
The Sinclair Spectrum and Commodore Amiga are both interesting as they were the first to be
used for video titling in the home and by the early semi professional videographer.

This was the first ever desktop computer. It had 8K of RAM.
It also has the blue tinted screen cover. 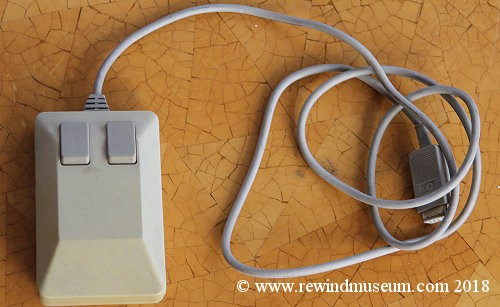 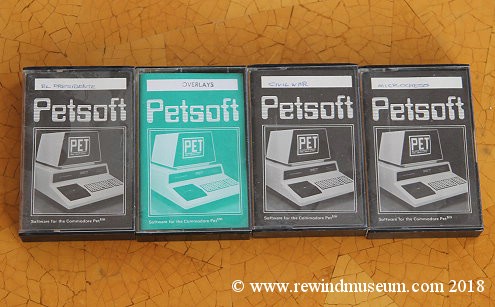 This could be called the first home computer, however, it was mainly to be found in schools and colleges.
In the late 1970s I was teaching in a Science department and we received this Commodore Pet 2001
computer with integrated cassette tape storage. It was used for standardizing examination grades and
other uses. It was soon replaced with later models (below) with floppy disc storage and larger memories.
The PET sold for $495 but Commodore could only produce about 30 units per day at that time, and with
many orders the price was raised to $595. Users complained about the original PET keyboard. It was laid out
in a grid and not like a typewriter keyboard. Within a year Commodore introduced the PET 2001-N (which was
the same as the 3008 below), which removed the tape drive and had a standard keyboard and with a numeric
keypad alongside. The Petsoft cassettes above, left to right are El Presidente, Overlays, Civil War, and
Microchess. Also above is an original mouse. Since the PET 2001, was first presented to public at the
Winter Consumer Electronics Show in 1977 it is interesting to see it was also featured in the October
1977 issue of Popular Science magazine which is also in the museum. 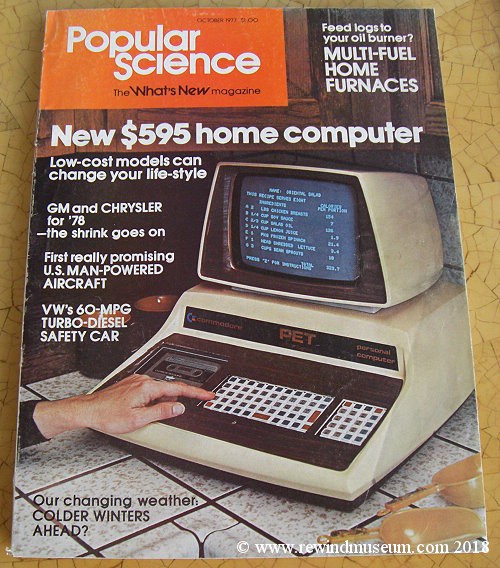 This was the second generation Commodore PET. It also had 8K of RAM but had a new keyboard.
The 3008 was a direct descendent of the 2001 above (the German 3001 is in fact a rebadged 2001 with a different
keyboard), Commodore removed the tape drive and fitted a standard keyboard and with a numeric keypad alongside.
In 1979, Commodore introduced its first floppy drive. This 3008 in the museum is complete with dust cover and manuals

Introduced in Japan in 1980 and in Europe and the States in 1981 at $299. About 3 years after the Commodore
Pet (the first personal computer) the Vic 20 became available. This was the first ever computer where more
than 1 million units were sold. It was meant to be a low cost home personal computer. It was the best selling
computer in 1982, however, even then it started to lose favour as the more powerful Commodore 64 was announced.

The ZX81 was the first home computer in the UK to sell at under Ł100 (Ł99.95). 100,000 units were sold.
It was sold by Science of Cambridge Ltd, later to be called Sinclair Research. It was very popular,
indeed they could not make them fast enough and there was a waiting list lasting several months.
It was available fully assembled (as shown here) at Ł99.95 or in kit form at Ł79.95
The ZX80 in the museum is in the original box sent from Sinclair and the box has a 1980 postmark. 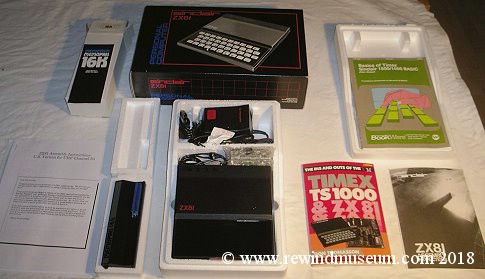 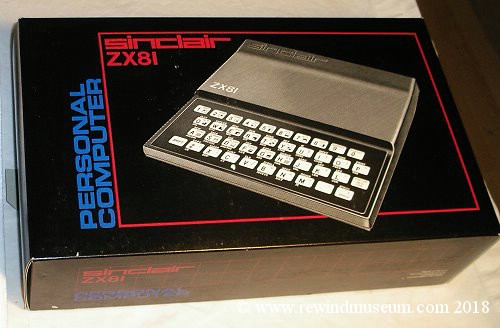 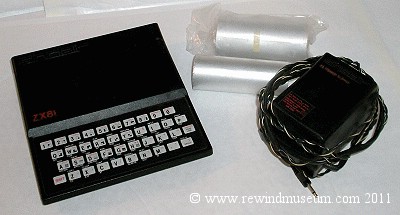 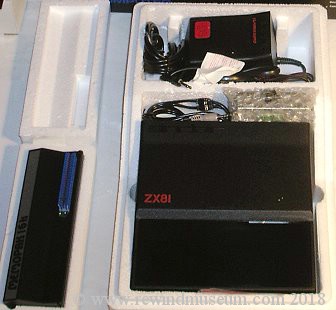 There are two ZX81 computers in the museum. One is shown above as complete. The other is an unused kit in a box.
It was possible to buy the ZX81 as a constructers kit of parts and you could put it together yourself. The
pictures show that this kit has never been assembled. This commuter was manufactured in Scotland by Timex
Corporation for Sinclair Research and was the successor to the ZX80. The ZX81 was designed to be small, simple,
and inexpensive, It used as few components as possible to keep the cost as low as possible.
The kit was Ł49 and the assembled computer was Ł69.00 in 1981. 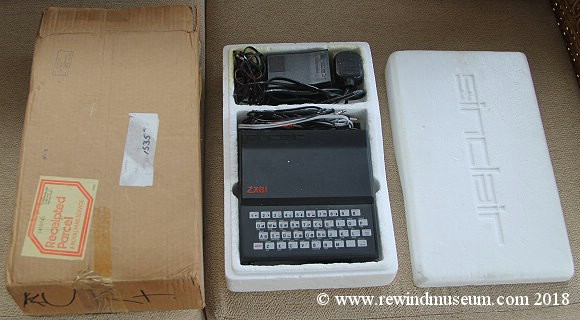 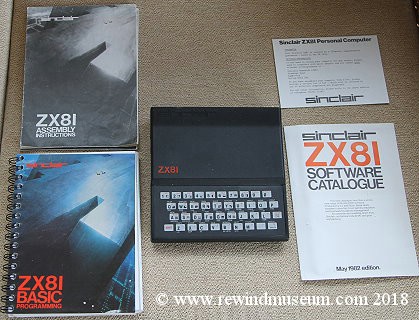 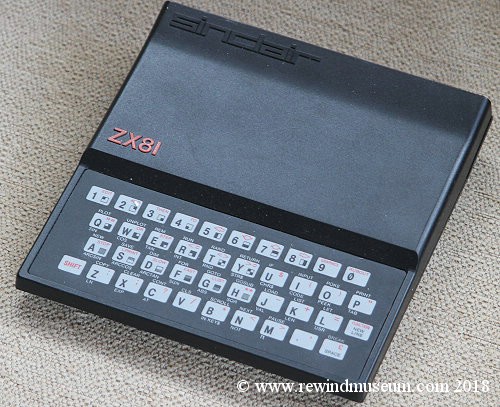 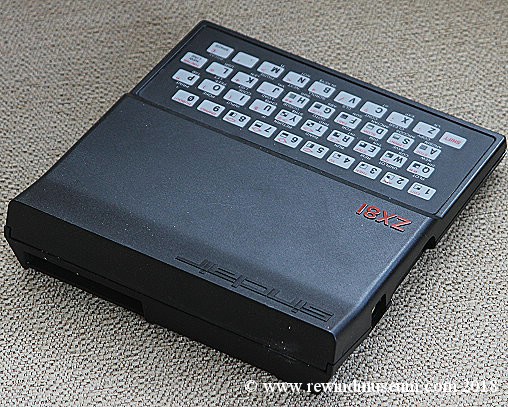 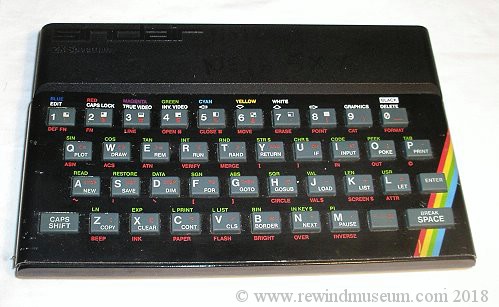 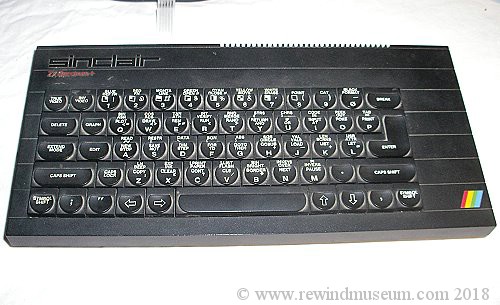 Shown above is the Sinclair ZX Spectrum (top left) and the Spectrum + (top Right). The Spectrum was originally
released in the UK in 1982 and cost Ł125.00 (16Kb model) although later it was reduced to Ł99.00. The 48Kb
model was Ł175.00. The Spectrum + was introduced in 1984 and retailed at Ł179.94 and had the "QL" style
keyboard rather than the original rubber keyboard. Many companies wrote software programs for the Spectrum
computer. Indeed when we started our video production business in the 1980s, we initially used a spectrum
computer for the video titling system (onto SVHS tape). Also in the museum is a copy of ZX Computing
from September 1982 featuring the Spectrum computer.

The first ever 32 bit CPU computer.

The Sinclair QL was introduced by Sinclair as a fast computer to replace the 8 / 16 bit computers that were around at
the time. It used the new 68008 processor from Motorola. The QL was the first home computer based on a 32 bit CPU.
All previous computers from Sinclair were aimed at the home consumer but Clive Sinclair aimed the QL at the business
user. At the time I saw it on the front cover of "Sinclair User" and I have kept the magazine ever since then. It is
great that after all the these years the museum has two QLs including one boxed and perfect. In 1984 the Sinclair QL
cost Ł399 Customers paid a deposit so they could receive a QL as soon as it came out. this proved to be a mistake -

The QL data storage drives were small magnetic tape cartridges and stored about 100K. The museum has about 50 of these
drives. The QL was introduced before all the bugs were sorted out and early samples received poor press reviews. They
hung up and lost data. Later units worked well but the microdrives did not offer enough storage. When Amstrad took over
Sinclair, the QL was discontinued. After the success of the Spectrum and the ZX range, the QL was considered a failure,
however, many QL enthusiasts exist today and software is widely available for it. The manual for the QL was like a phone
directory and both QLs in the museum are complete with manuals. Also in the museum we have a copy of "Sinclair User"
(see above) announcing the launch of the QL from March 1944 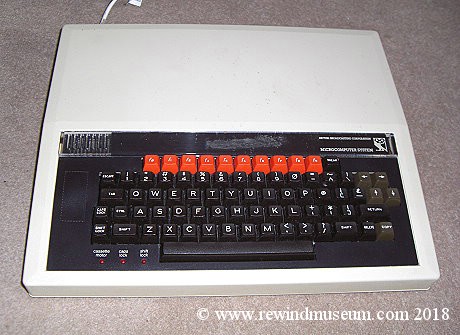 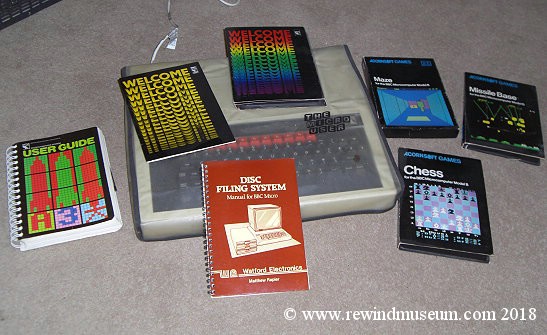 In 1980 the BBC decided to start a computer literacy television series. They considered the NewBrain computer, the
Acorn, the Sinclair Research computer, and others. Acorn won. The BBC Micro was mainly used in universities and
in British schools from the start of the 1980s and through the 1990's. I am sure some schools may still have them.
The Model A was followed by the BBC Micro Model B with more RAM. In the 1980s I was a Head Of Technology in
a school and we used the BBC Micro computer mostly for the control of robotics. It was ideal for that purpose.
The Model A was Ł235 and the Model B was Ł335 in 1981. 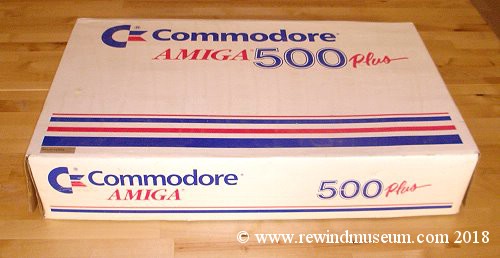 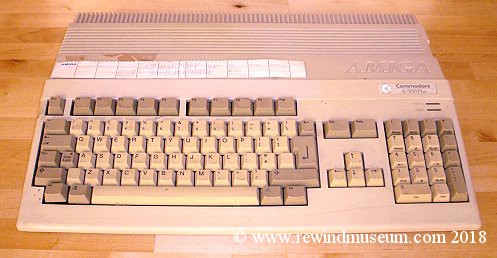 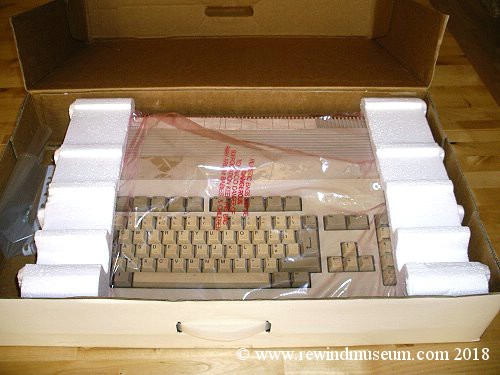 The original Amiga 500, also known as the A500, was the first low-end Commodore Amiga home computer. It was announced
at the "Consumer Electronics Show" in January 1987. The Amiga 500+ was released at the end of 1991 but not announced
until 1992. Although the Amiga 500+ was an improvement to the Amiga 500, changes were minor. It was discontinued and
replaced by the Amiga 600 in the summer 1992. This made it the shortest lived Amiga model. 4 to 5 million Amega 500
computers were sold. The original Amega 500 cost Ł499.00 at launch although it dropped to Ł399.00 Here we have an
Amega 500+ in the museum. Boxed and complete. Also in the museum, "The Directory" magazine featuring the Amiga in 1991 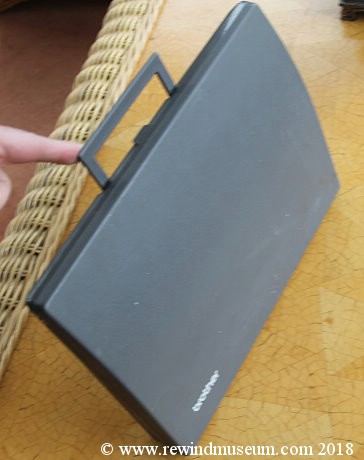 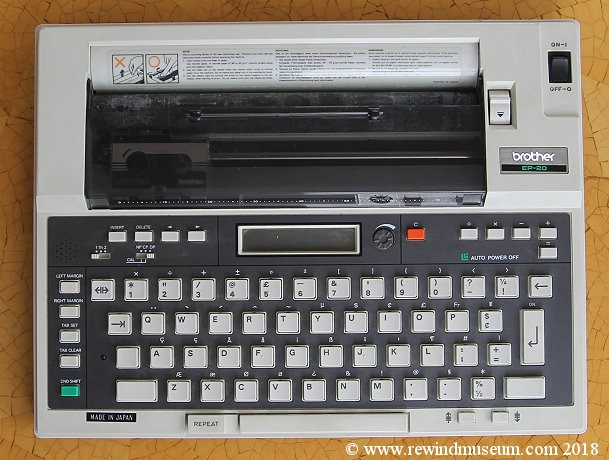 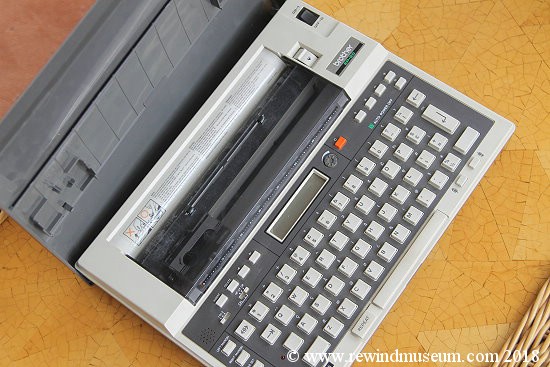 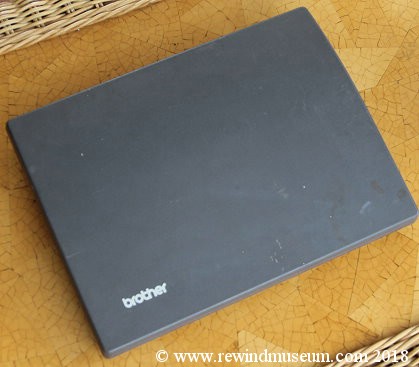 The EP-20 was the world's first & smallest battery-drive electronic typewriter. Also called a
dedicated word processor. By combining thermal transfer technology and high technology, its
compact body, advanced functions and high performance was achieved. Other companies followed
this innovative product and the trend for miniaturization of typewriters greatly progressed.
The EP-44 followed in 1984 and is shown below.

Here you can see the Brother EP-44. An electronic personal printer / word processor. In 1982 the EP-20 was
the world's first & smallest battery-drive electronic typewriter. By combining thermal transfer technology
and high technology, its compact body, advanced functions and high performance was achieved. Other
companies followed this innovative product and the trend for miniaturization of typewriters greatly
progressed. The instruction manual was published in January 1984.

And ... before the computer was the typewriter 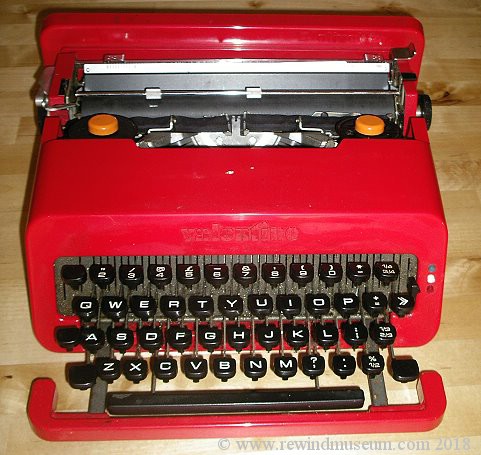 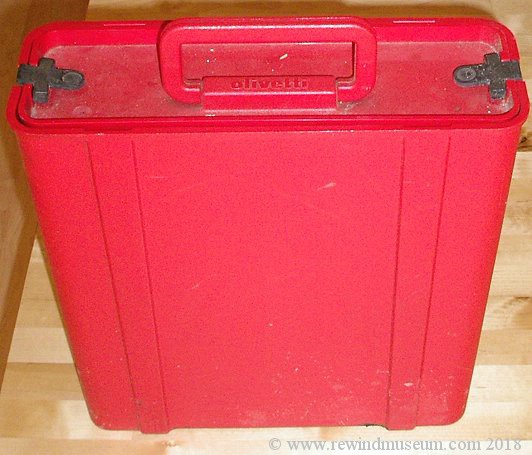 Designed by Ettore Sottsass with the British designer Perry King for Olivetti, the Valentine typewriter
was launched in 1969. It is still in demand among collectors. It was a beautifully designed Italian
typewriter and the Valentine portable has been described as a typewriter ICON.
This one belonged to my wife from new and is in mint condition. 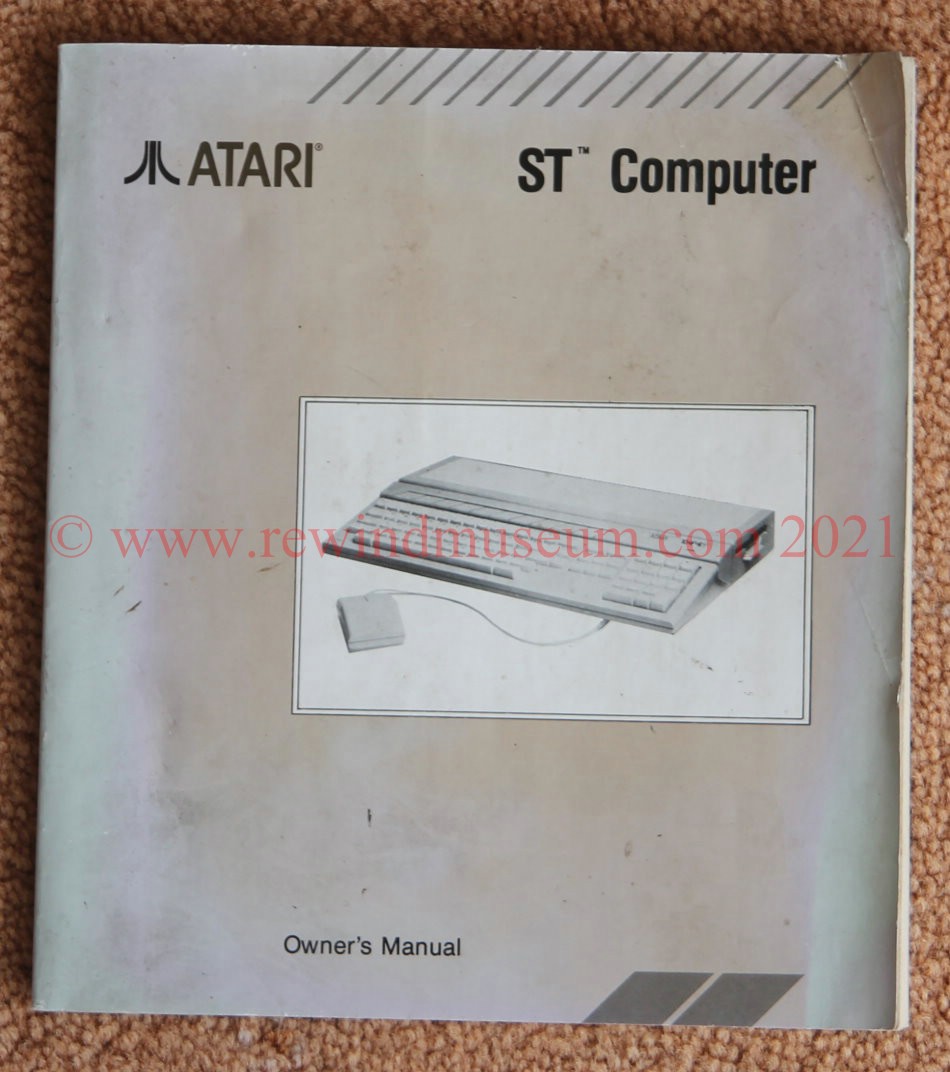